The Ministry of Industry and Trade (MoIT) is working to connect enterprises and localities facing COVID-19 outbreaks to ensure goods are consumed, especially agricultural produce in virus-hit areas. 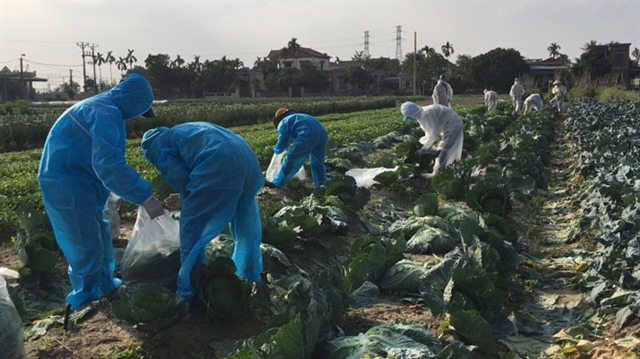 So far, Central Group has purchased 100 tonnes of vegetables and fruits per week from the province for consumption in its retail system. The volume is expected to increase to 200 tonnes per week soon.

This week, its GO! and Big C outlets in the North will consume about 70 tonnes of Hải Dương’s agricultural products and will increase the sales until the end of the season, the group said.

MM Mega Market Vietnam has ordered 24.3 tonnes of vegetables per day from Hải Dương, including kohlrabi, cabbage and guava for its distribution systems in the central and southern regions. Vinmart has also ordered some agricultural produce.

The ministry has also worked with the Ministry of Agriculture and Rural Development, localities and enterprises to discuss solutions to remove difficulties in transportation and consumption of goods, especially agricultural products with a large output and in the harvest season, especially in Hải Dương and neighbouring provinces, it said.

According to the Hải Dương Department of Industry and Trade, most COVID-19 control stations in neighbouring provinces and cities have restricted entry from vehicles going from or through Hải Dương, leaving agricultural produce stuck and impacting farmers’ livelihoods.

Localities and enterprises have complained that the implementation of the requirement for COVID-19 testing in transporting goods has many inconsistencies, leading to difficulties in consuming agricultural produce.

Difficulties transporting commodities has also affected production in the province and also other localities like Hà Nội, Hải Phòng and Quảng Ninh because many commodities in Hải Dương are materials for processing chains at factories in the localities, according to the ministry. That will also affect the socio-economic development of many localities.

Meanwhile, Hải Dương is implementing many measures to facilitate the transportation of agricultural produce in the harvest season.

Over the past three days, the province has prioritised the implementation of COVID-19 testing for truck drivers and returned the results within 24 hours to accelerate goods transportation, according to Hải Dương Provincial Party Secretary Phạm Xuân Thắng.

To facilitate the fastest transportation of goods, especially agricultural produce and frozen goods, Hải Phòng City People’s Committee was asked to allow trucks with drivers with proof of a negative SAR-COV-2 test result issued by the Hải Dương Centre for Disease Control to go to the quarantine areas between Hải Dương and Hải Phòng. After that, the driver in Hải Phòng will drive that truck into this city, reported the Người lao động (The Labourer) newspaper.

According to Hải Dương Agriculture and Rural Development Department, about 4,080ha of crops with a productivity of about 90,760 tonnes are going to be harvested including more than 55,000 tonnes of onions, 50,000 tonnes of carrots and 8,000 tonnes of cabbage, kohlrabi, cauliflower and leafy vegetables.

However, social distancing in Hải Dương had made it tough to transport the carrots from Đức Chính to ports in Hải Phòng.

Besides that, the pandemic had caused many localities to stop transporting agricultural products, including carrots, to Đức Chính, for processing and packaging. — VNS